We write to share our urgent concerns about the human rights of three prominent anti-discrimination activists who have been detained by Changsha Municipal state security agents and facing possible state subversion charges. Cheng Yuan, Liu Yongze and Xiao Wu of Changsha Funeng have done important work to end discrimination against people living with HIV and people with hepatitis, and to advance the right to health and rights of persons with disabilities in China. As the supervisor of Changsha Municipal State Security Bureau, you should ensure they uphold the legal rights of these three activists.

Cheng Yuan has led over a decade of ground-breaking impact litigation on health rights — first at Tianxiagong, and later as co-founder of Changsha Funeng. Two of his landmark cases, in 2013 and 2016, won damages for teachers who lost their jobs due to their HIV status. Cheng Yuan has also led work on hepatitis B discrimination litigation, advocated forcefully for the rights of persons with disabilities and for an end to China’s One Child Policy, and worked to promote freedom of information and rule of law.

On Monday, 22 July, Cheng and two colleagues, Liu Yongze and Xiao Wu, disappeared. Cheng Yuan’s wife, Shi Minglei, has nothing to do with his NGO, but she has been placed under residential surveillance under suspicion of subverting state power. Cheng Yuan’s brother has also been questioned by police because of his vocal concerns about the case. So far, their lawyers have not been able to meet with any of the three activists.

As a UN member state, China committed to the 2030 Agenda for Sustainable Development in 2015, and in doing so committed to ending HIV by 2030, to combating hepatitis, to promoting peaceful and inclusive societies for sustainable development, and to achieving “zero discrimination” against people living with HIV. To achieve this, UNAIDS recommends countries finance and support HIV-related legal services to reduce stigma and discrimination, and the Global Fund has committed to scaling up this work in numerous countries — it is exactly the kind of work in which Changsha Funeng has expertise.

China must not only uphold, but set a positive example to the world of promoting UN commitments to end HIV and end discrimination, as well as international human rights law. The Changsha Three live and work in Changsha. We urge the mayor of Changsha to commend Changsha Three instead of detaining them, and we urge you to directly address the harassment by Changsha state security police of Cheng Yuan’s family members. 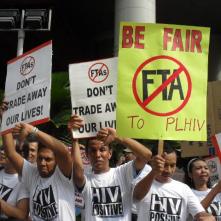 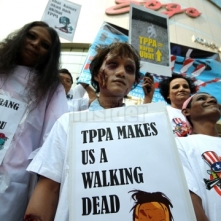 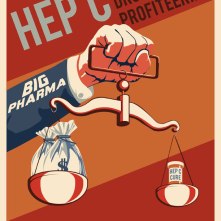 Malaysians rally in Kuala Lumpur, opposing the Trans-Pacific Partnership, corporate greed, and the indifference of prime minister Najib Razak and his government.